In mentioning rivers, the ultimate image of the enjoyment they provide is seen in EH Shepherd’s illustration for Wind in the Willows by K. Graheme.
“There is nothing–absolutely nothing – half so much worth doing as simply messing about in boats.” Ch. 1.

Word nerds flowed out beyond the confines of the classroom this week. We went downtown on a field trip to explore the mosque,  a church, and temples, Taoist and Hindu, found in the China Town area. A little word nerdery occurred when confronted by the confluence of the Rivers Gombok and Klang, the site of Mesjid Jemek!!!

Confluence – a word from Latin fluere to flow. We thought the morphemes to be: con+flu+ence . From this root a flood of words: fluid, fluent, affluence, effluence, influence, influenza. We will draw up a matrix when we return from the Christmas break to record our findings. Perhaps too an investigation into phonesthemes. This is , as my Mac dictionary indicates,:’ the attribution of common elements of meaning or connotation to certain sound sequences, especially consonant clusters, for example initial sl-, as in slow, sleep, slush, slide, slip . Interesting to explore with ‘fl’. 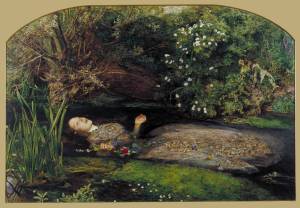 Ophelia by Sir John Everett Millais, painted 1851-2.
‘Till that her garments, heavy with their drink,
Pull’d the poor wretch from her melodious lay
To muddy death.’

And with the mention of rivers and muddy converging, the Latin root fluere and link to influenza, I leap to poor hapless Ophelia and the John Everett Millais painting of her (1851-2). Influenza as Online Etymology Dictionary notes, was first attested in 1743 in Europe with an outbreak of the disease.  The original  connection to starry influences and disease is fascinating.  Not surprisingly  influenza,  is precisely what effected the watery Millais model,  the muse of the  PreRaphaelites- Elizabeth Siddal, who, floated over a period of four months, in a bath full of water posing as Ophelia. While Siddal did not drown in a ‘muddy death’, she did however catch a severe cold, influenza – a term being used for colds at the time of the painting, when Millais failed to relight the kerosene lamps that kept the bath water warm! Poor shivering Ms. Siddal caught a cold so severe that her father threatened legal action until Millais agreed to pay the medical bills!