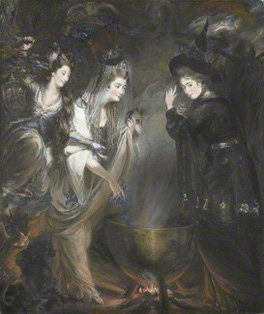 These witches appear to be a little too cheerful about their doubling – or perhaps they have just reassembled the flow chart so that doubling poses no more toil and trouble!

To double or not to double that is the question that has recently been haunting us! Students  are wrestling with the dilemma of whether a final consonant letter in a base element or stem will double and if so under what circumstances. Rather than simply presenting the rule and the Real Spelling flow chart, students have examined a list of words where doubling has and has not occurred. They have been challenged to note any patterns and then develop a hypothesis as to the circumstances that lead to doubling.

I found that with several groups such as the ones above, I had to push them to go beyond their first assumption, and encourage them to see there may be several factors involved . This was a great opportunity to emphasize the need to test a hypothesis, does it work each time? If not, it needs to be reconsidered or revised. I had provided a box of useful terms : base , consonant letter, vowel letter, stem, monosyllable , polysyllable, stress, suffix. I was pleased to see the collaboration and high degree of involvement in the challenge, the close attention to each word and its letters while looking for patterns so lots of talk and discussion, testing, and retesting.

Students sat on the theory overnight and came back in the next day where they talked through their findings in their groups. I realized that the ‘stress’ factor would be difficult to discern so chopped up the doubling strand on the ‘Real Spelling’ flow chart and presented the students with the challenge of reassembling the flow chart into a logical sequence so that each word sum they had been given could be accounted for.  We discussed how all the steps to doubling lay in this flow chart and that it revealed what in many cases they had uncovered in their investigation so far.

Videos below show student thinking while reassembling the flow chart speculating as to the best initial steps to take.

Students later were presented with the completed Real Spelling suffixing chart and made comparisons to their efforts at reconstructing the steps involved in doubling. One student Oluwadara told me at the end of the lesson that she had first experienced doubling in a mini- lecture earlier in her school career. She and her peers had gone through various exercises, but “because all we did was listen, it was boring so I hadn’t really taken in the information, and I still didn’t understand why.” The act of wrestling with data, searching for relevant patterns, allowing students the time to speculate to develop a hypothesis then test this out, prepares the mind and I believe allows for deeper understanding when encountering the facts later on. As Oluwadara said, ”It makes sense when you have thought deeply about something and tried out different ideas.” Active engagement versus passive absorption.

Image This painting by Daniel Gardner in 1775 shows three friends the reputedly ‘glamorous and notorious’ the Duchess of Devonshire, Viscountess Melbourne and the sculptor Anne Seymour Damer. Apparently the cauldron and presentation alludes to their ‘shadowy political machinations’ in Whig politics.